A few months ago, in a fit of boredom, I decided to become a Couch Surfer.  https://www.couchsurfing.org/  Here's a short summary of what it's about:

Couchsurfing is a global community of 6 million people in more than 100,000 cities who share their life, their world, their journey. Couchsurfing connects travelers with a global network of people willing to share in profound and meaningful ways, making travel a truly social experience.

At the end of January, I hosted a lovely young woman, Angela, from Brazil.  Interestingly enough, she was from Porto Alegre.  The very place I visited a few years ago.

Dan is from London.  He's 37 years old and gay.  Which is why I invited him.  Still, I had second thoughts right before he arrived.  My imagination is quite vivid (imagine my saying that with a British accent,) and the thought crossed my mind that he could be a serial killer posing as a harmless, jolly, Englishman.  So at the first opportunity, I mentioned that I have a gun, and that I'm proficient in Taekwondo.  He was a tad taken aback.  A discussion ensued about the utopian gun-free society of the UK.  I said, "Dude, you're not in Kensington any more, and I WILL put a cap in yo' ass."  Unfortunately, I don't know where the bullets are.  But he didn't know that.  Since he looked a little shaken up, I decided against acting out the scene from Annie Hall where Christopher Walken (Diane Keaton's brother) is driving Woody Allen from the airport, and asks him if he ever had the impulse to swerve into oncoming traffic.  One of my favorite movie scenes.

It was totally benevolent, though.  I just wanted him to experience a nice slice of life in Memphis.  I really am a very gracious hostess.  Why else would I eat barbeque three days in a row?  Take him to Graceland (I just dropped him off, though,) spend hours on Beale Street, and introduce him to my coolest friends?  Pick him up at the Greyhound station and drop him off at the airport?  About the Greyhound station.  He called me when his bus pulled up.  I told him he'd know me because I was the only white person there.  But I think I might've said it a little too loudly, because I noticed quite a few stink-eyes after that.  When the passengers on his bus shuffled into the station, I was a little freaked out, because there were several very weird men (it had been a while since I'd looked at his picture,) and making eye contact with them was a little scary.

But all's well that ends well.  I convinced Deb that he hadn't stolen the silver or my identity.

Now, I'm going to close.  Because I have fun plans for tonight.  With the cutest, funniest, sweetest guy I've met in a very long time.  So I'm gonna get started with some serious primping right now... 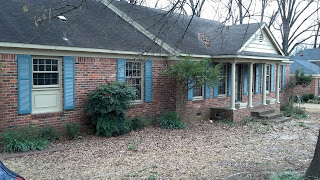 Wow!  Here's my rental house - my old house.  The house I loved.  I lived there for 22 years.  Raised Kiddo there.  Made a home for The Daddler there when Mother died.  I have so many pleasant memories of my time there, but too many painful ones, too.  Bittersweet, I suppose.

I was fortunate to be able to hang onto it when I found The Good House two years ago.  I've had two short-term tenants since then.  They were friends of friends.  I'll just say that I'll never again do biz with someone I know.  Because it's never arm's length.  That's an audit concept, with good reason.  It's a recipe for disaster.

So, I was pleasantly surprised when my latest tenant (the Princess,) texted me that she was moving out.  Maybe her parents cut her off (her mom paid the rent,) or her new husband grew a pair and decided to contribute to the cause.  Forgive me.  I'm about to sound like a snob, but I need to vent my spleen.  So I'll just put it out there.  She probably qualifies as a member of the Southern Aristocracy.  It was a rude awakening to her, being forced to live without granite countertops and a Viking stove.  I hated to turn her down when she offered to update the kitchen in lieu of rent.

Back to the future.  She vacated the premises at the end of March.  I took the path of least resistance, and waited to put a sign in the yard until she was gone. It was so unpleasant when her asshole-husband told me I could "fuckin' sue him" if I tried to show the house before they moved.  What a Prince Charming.

So, Thursday afternoon, I put the sign in the yard.  Friday morning, I received a call. Friday afternoon, my propective tenants took a look.  Friday night, they asked me to hold the house.  Saturday morning, I inked the deal.  A three-year lease, no less!  Sweet, sweet family.  They wanted to move in immediately.  They'd been searching for months for a house in that neighborhood.  It's the best school district in town.  Not to mention, a great neighborhood.  And of course, a wonderful house.

So, all's well that ends well.  Huge relief.  Now I'm going to work on getting my latest parcel ready to rent.  I have a feeling it'll be equally successful...﻿
Posted by Carol at 4:01 PM No comments: