A view from my patio.  It's a perfect picture of my day.
I'm so ready for spring.
I want to spring my clock forward.
Watch my garden spring to life.
Spring this prison called winter.
﻿
Posted by Carol at 1:47 PM No comments:

It's official.  I'm a martial artist!  I took my first class yesterday.  In Taekwondo.  Don't f--- with me.  Because I learned how to punch, kick, jab and block.  I'm fearless.  Except I'm afraid of the situps.  Give me a mugger anyday.  Just don't make me work on my core. 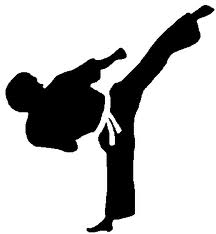 I think I benefitted from my endless hours of yoga.  And watching boxing.  And psychotherapy...

And reading Shades of Grey.  Because there's an element of submissiveness.  SOG glamorizes that.  I can't buy into it, but I guess I can accept the idea, if it makes me fearless, calm, and able to leap through the air like that cute girl in Crouching Tigers, Hidden Dragons.  Or is it Hidden Tigers, Crouching Dragons?  Crouching Dragons, Hidden Tigers?  Damn.  This is worse than Men are from Venus, Women are from Mars.   Or that stupid movie - Men are like Dogs, Women are like Cats.  Can that be right?  Surely not.  Someone should make a rule that movie titles can't be more than three words long.  Forget trying to come up with some unique title for a sequel.  Stick a roman numeral behind the original title. Godfather.  Godfather II.  Godfather III.  That's it. Think of how much money that would save.  I'm sure the marketing gurus charge out the ass to come up with something catchy.  When all we want to know is where it falls in the timeline.

Ok.  I took a muddy hike at Shelby Forest this morning.  My hiking boots fell apart (it's been a long time since I've used them.)  So between Taekwondo and hiking, I'm pooped.  Sore.  I think I'll take a hot bath.  And hope Sally doesn't wake me up before 4 in the morning...

...is another man's treasure.

I've been watching Antiques Roadshow lately.  That's a dangerous combination paired with my thrift shop addiction.  There's the most incredible thrift store about two miles from my house.  They do a huge volume, and the pricing is crazy.  They might have a box of tampons for $12.98, and a priceless Picasso for $1.50.  Ok, I'm exaggerating a little bit, but you get the idea. 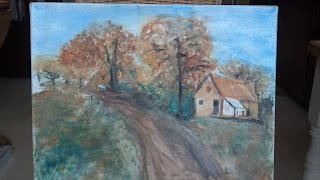 So far, I haven't found any Picassos.  But yesterday, I decided to get a jump on the Presidents' Day half-price sale, so I went by.  And I found seven original oil paintings.  They didn't really appeal to me and I figured somebody's grandma had taken art classes at the senior center.  They were kinda primitive.  Landscapes, including four of brick houses.  They were relatively large - 16" x 20".  One was unsigned and the other six had large, very legible, bright red signatures bearing the name "H. Hubbard."  So I pulled out my handy-dandy smart phone, and googled away.  Turns out this guy has an extensive Wikipedea page.  And he was from Covington, Kentucky - my mother's home town.  Weird, huh?  He was something of a recluse.  He was called Kentucky's Thoreau.  Cool. 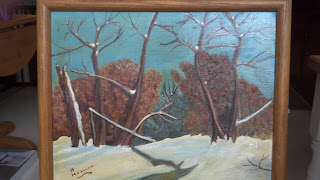 I did some research, and I saw some pretty impressive prices.  Up to $6,000 on one site.  And it was much smaller than mine.  Unfortunately, you have to subscribe to look up closed auction results on art gallery sites.  I found one, though, which specializes in a handful of artists, including Hubbard.  They buy his work, so all I need to do is email some photos and shazam, I'll collect my winnings!  How thrilling is that?

So I decided to buy all seven.  Unfortunately, one of them wasn't priced.  All the others were marked either $2.98 or $3.98.  The lady manning the register refused to sell me the unpriced painting.  A manager had to do the pricing, and there wasn't a manager on duty.  I talked her into holding it for me until today.  When I returned today, I asked five people if they'd seen it before it was unearthed.  It was marked $3.98.  Which means, after the 50% discount, I paid $1.99 for my treasure.  Wow.

I'm pretty excited.  Or, I should say, cautiously optomistic.  I'll keep you posted...

And They Called It...Puppy Love

I promise, you're gonna get that tune stuck in your head.  We welcomed our newest canine to our home yesterday.  And we're all head over heels in love.  Except Lucy.  She's tolerating her baby sister.  Sally.  Sally Brown.  Get it?  Lucy van Pelt.  Sally Brown.  Yes, there's a theme.

But the biggest theme of all is The Daddler.  The way he manages to adapt to changes.  I only hope I can cope that well when I'm 81!  Even though he was dead set against getting a new pup, he softened up when he saw all the little things I brought home (tiny coat, harness, leash, etc.)  And from the moment he set eyes on her, he was madly in love.  But what is cuter than a puppy?  Except at 2 a.m. when she's crying for her mama.
Oh, well.  I'm getting kinda reckless lately.  Carpe-ing the diem.  And enjoying the ride.

Since we moved into the Good House almost two years ago, I've had the plumber come out no fewer than a dozen times.  Not counting trips to the rental houses.  When he answers the phone, I say, "Steve, it's me again."  To which he replies, "What is it now, Carol?"  The latest problem is a broken kitchen faucet.  I went through the major decision process, considering every possible scenario:  Go ahead and get a new sink and a new faucet, while I'm at it; Hurry up and replace the countertops and do it all in one fell swoop, since I've been contemplating that for some time now; Just get the current faucet fixed and wait on the other stuff;  Get a new faucet which would, hopefully, fit a new sink down the road;  Just use the hot water faucet handle until I make up my mind. 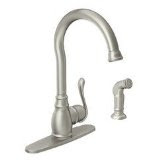 After talking to my plumber and comparing all the options, I decided to go with the next to last option - just get a new faucet.  He's coming at 9:00 tomorrow morning.  I high-tailed it to Lowe's, and after more serious deliberation, settled on this lovely fixture:

Luckily, Joe the Plumber forbade me to get any other brand than Delta or Moen.  That made my decision much easier.  Do you know how many choices there are?  It's a Moen Anabelle.  It set me back $178.  When I got home, I decided to check my beloved Amazon, expecting to find it for half that price.  Lo and behold, they have it for $332!  Wow.  Up until now, they always meet or beat the competition.

I'm excited about my latest improvement.  I'm sure I'll have more to tell tomorrow.  Stay tuned...
Posted by Carol at 2:11 PM No comments:

I'm going there.  Soon.  I've watched Four Weddings and a Funeral one time too many.  But I don't care.  The Couch-Surfers thing is so cool.  I've wanted to go to Edinburgh for so long, and now's my chance.

For now, though, I'm heading to Interim with my sweet, sweet friend Julia.  She's a Reese Witherspoon look-alike.  And just as sweet.  Love her so much.  We're way overdue to get together.  She was instrumental in my finding Lucy.  She's a sucker for strays - maybe that's why she likes me!

Speaking of strays, I'm on the verge of meeting a stray tonight.  Complicated story, but I'm feeling reckless and daring.  But tired.

I made it through my uncle's funeral Saturday.  No small feat.  It took me a coupla days to recover.  I spent Sunday morning crying.  So cathartic.  Then I pulled myself up by the bootstraps and went shopping for new cars and puppies.  I'm happy to report that I've scored one of each!  And both are sweet!﻿﻿﻿﻿﻿﻿﻿﻿

﻿﻿As usual, The Daddler didn't approve.  And as usual, I told him he didn't get a vote.  And as usual, he will be over the moon with our new toys.  I didn't tell him about the car.  When he came in from taking Lucy out, he asked me whose car was parked in the driveway.  I told him it was mine.  He didn't seem happy, but he agreed to take a spin in it.  Once I pointed out the dual climate controls, remote ingnition start (so it can warm up before we get in it), and the butt-warmer, he was a happy camper.

Sally (the new pup) won't be here for a week or two, and he's playing his usual curmudgeon role.  Says he's not going to take care of her.  But I'm not worried.  In the least.  He'll love her from the get-go.
﻿﻿
Wow.  This has been a monumental week for me.  Especially since I have major trouble making decisions.  I guess there's been a thing or two that made it easier.  Dead uncle (carpe diem.)  The realization that my tuition-paying days are over - Kiddo got a sweet NYC internship with Morgan Stanley this summer.  Spring fever. Tax refunds.  The prospect of having a valentine for a change.