The Cold Blooded Killer Among Us 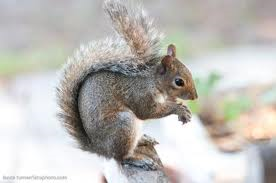 Sally.  She's a bad seed.  Full of blood-lust.  She shredded a poor squirrel Saturday.  I was lounging on the sofa when Lucy and The Daddler came strolling in from their daily walk.  Lucy ran to me and commenced her lascivious licking.  The D said, "He just eat a baby squirrel."  I recoiled in horror at the thought of squirrel-carcass-laden saliva being lavishly slathered on my forearm and face.

It took a full 10 minutes of cross-examination, complete with a game of Charades, to determine that it was Sally, not Lucy, who'd brutally murdered a cute little squirrel with his life stretching out before him.  I asked The Witness if he'd interred the remains of the victim.  He said, "Naw.  I told you, he eat 'im!"  I found it hard to believe that the dog had devoured ALL of the squirrel, and I had flashbacks to the explosive diarrhea episode from a few weeks before, so I grabbed two blue plastic newspooper bags (I coined that term) and high-tailed it to the back yard.  I explained to The D how to put his hand in the bag and grab the body and turn the bag inside out.  He said, in the rudest tone possible, "I know how to do it."  Keep in mind, he's only picked up dog poop ONCE.  And that was after he saw a story on the local news that it was illegal to let your dog shit around town.  And the only reason I know that is because I happened to see him stroll up the driveway after a walk with the Queen of Turds, Lucy, holding the shiny blue package of poop.  That was cool.  Until I encountered said sac swarming with flies at the end of the driveway.  I guess he didn't want to stink up the garbage can.

Back to the back yard.  Turns out, Sadistic, Satanic Sally hadn't eaten the entire squirrel.  Because after she did her usual Tigger imitation upon seeing us, she grabbed the remainder of the rodent and started sprinting around the yard.  I let out a blood-curdling scream.  I even scared myself.  And I kept screaming.  Something about seeing the bloody entrails of a cute baby animal being slung around playfully, like a Frisbee, in the jaws of a member of my family, triggered a visceral, guttural reaction in me.  When I finally caught up with the killer, who was loving every minute of the chase, I snatched her by her harness (it was reminiscent of how I'd stopped her from severing Lucy's aorta not two weeks earlier,) and she dropped her quarry.  I was queasy.  The Daddler took over.  I don't know what he did with the squirrel.  All I know is that garbage pickup was two days later and the weather was cooler.  And I didn't see the blue body bag.
Posted by Carol at 2:45 PM No comments:

By the way.  If you're ever in the market for a major appliance, go to Sears.  If you value your sanity, that is.  I needed a refrigerator for one of my rental houses.  I called Lowe's to see how long it would take to get a fridge delivered, and after pressing 8 for appliances (had to listen to 1 through 7 first, of course,) someone answered.  When I said I wanted to check the delivery wait for a refrigerator, I was told to hold for the appliance department.  Why the FUCK did I have to suffer through the phone tree?

Surprisingly, an "associate" answered within a minute or two.  The operative syllable being "ass."  Dude was channeling Barry White.  I told him I needed a fridge, and asked him if they had any good deals on a dented floor model.  He said, and I quote, "Come see me and I'll show you something good."  I said, "How much is it?"  He said, "It retails for $2,800, but I can give it to you for $1,400."

I told him that was out of my budget, but I asked him how long it would take to deliver an in-stock model.  He said three to five days.  I asked if that was three to five business days or three to five real life, powdered-milk and peanut butter days.  He told me to come see him and he'd see what he could do. 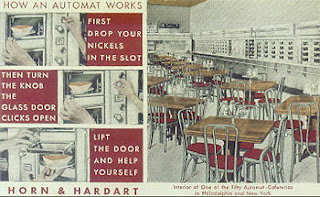 So somewhere in the primitive portion of my brain, there sprung a vision of Sears.  Which was especially appealing since there's still a Non-Mall Store about 3 miles from my house.  So adorably anachronistic.  Which makes me think of Gimbels.  Horn and Hardart Automat.

The Sears Christmas Wish Book.  Quick Curl Barbies.  The picture in the 1972 fall catalog's men's underwear section with an unfortunately (or not - depending on how you see it) well-endowed male model's member descending below the level of decency.

Wow.  I digress.  Bottom line, though, is that there's a real refrigerator residing in the rental right now.  Hallelujah.

Yesterday was traumatic.  It started out calmly enough.  Mid-morning, while I was upstairs getting ready to go out and run errands, I heard The Daddler come in the back door and scream for me.  A few minutes earlier, I'd heard Lucy and Sally growling and barking at each other in the back yard.  It sounded more serious than their usual sisterly knock-down-drag-outs, so I looked out the upstairs window to check, and I saw The D standing by the fence, so I didn't worry.  Normal behavior for snack time.

This time, though, it escalated.  And the way Daddy was hollering, I knew something was terribly wrong.  Other than the awful shingles episodes when he first came to live with me, and the time he thought I was asleep when he was ready to go to his doctor's appointment (I wasn't,) I've never heard such panic or distress in his voice.  So I sprinted out the door, fully expecting to see one or both of the dogs with their aorta(s) ripped to shreds.  Fortunately, it wasn't that bad.  They were one mangled, muddy mass snarling and barking and rolling around at the bottom of the hill.  The Daddler had tried to break up the fight by spraying them with water from the hose.  Needless today, that didn't help.
I ran barefoot down the hill and grabbed Sally (who weighs 50 lbs.) by her harness and pulled her off Lucy.  I was surprised when Lucy (35 lbs.) jumped right back in.  I was standing there, covered in mud and blood and slobber, trying to get The Daddler to help me.  Bless his heart - he must've been pretty upset because he had a hard time figuring out how to help.  But I was shouting out one different command after another.  Finally, I got him to take Lucy, and I locked Sally into the back part of the yard.  I took Lucy inside and told D to watch Sally.  I knew right away that my Little Lulu was in bad shape.  She had lots of bite wounds on her neck and ears and she had a severe limp.  And she looked like she was in shock.  Those sweet, sad brown eyes.
So I grabbed a towel and snatched her up in it.  Got my purse and keys and ordered The D to get in the car with us.  We drove straight to the vet's office (just two miles away, thank God.)  When we burst in the door, the receptionist jumped into action, announcing an emergency, and requesting a doctor.  I swear, I think I could hear that theme music from ER playing in the background.  They ushered us into the first exam room, and then I burst into tears.
I could describe every little detail which followed, but instead, I'll just sum it up quickly.

We returned to the vet with Sally a little later - she hadn't come out unscathed.  Four hours, $300, and a week's supply of antibiotics and anti-inflammatories later, we were home with two sad, bruised, penitant puppies.  At least they were clean, though.  Lucy was still bleeding, so I wrapped a piece of cotton from a torn sheet around her neck as a bandage.  We had a little snuggle time on the sofa, while The Daddler looked on.
I headed upstairs, took a long, hot bath to wash the grime and slime away.  Then I started a new book.  Wild by Cheryl Strayed.  In the first chapter, she writes about losing her mother.  I don't know if it was the emotional trauma from taking care of my damaged dogs, or the fact that this is the time of year my mom started dying, or just the book, but I cried harder and longer than I have since before Mother died.  I wish I could say it was cathartic, but the truth is that I'm having a difficult day.  I'm feeling really down.  Missing my mom so much.
I guess it's normal for something like the dog debacle to trigger these feelings.  Because for a moment, I thought I'd lost someone I loved.  I do love my dogs.  Especially my sweet little Lucy.  I'm not so crazy about Sally right now, but I suppose it's natural for a mother to feel the most love for her child who's most in need of it.  Which is why I know that I was always Mother's favorite.

It's a long story, and unfortunately, I don't have time to recount it now, but suffice it to say, The Daddler was in rare form last week on our outing to Sam's Club.  Let's just say that my karma's growing leaps and bounds.
More later.﻿
Posted by Carol at 11:01 AM No comments: