I can't believe I haven't posted since October.  I've been kinda busy.

Made it through the holidays (although I still have a couple boxes of ornaments I need to take to the attic,) and hopefully, the worst of the long dark winter.

I started a new job a month ago, and the jury is out, but I think it'll be a good thing.  I'm working about 20 hours/week, the hours are flexible, and the money is decent.  They gave me what I asked for, which means I could've gotten more, but fortunately, it's not my bread and butter.  It IS nice to have the extra moolah coming in, but more than that, getting out of the house and feeling like a professional again.  The social aspect of working is good, but unfortunately, there've already been a few, ummm, difficulties.  As unpleasant as it was, I suppose it was good to get it out of the way.  After a week or so of walking on eggshells around a somewhat territorial, bossy, snappish, passive-aggressive co-worker, I finally stood up to her and explained that I knew what I was doing even if I didn't do it exactly the same way she thought I should.  I also told our boss about it and said that if she wanted to look for someone who would mesh better with said co-worker, I would completely understand.  I didn't intend this to be an ultimatum, but it probably served that purpose.  But it was also the truth, and after spending way too much time stressing out over it, I figured it would be better to cut my losses.

Sooo, I guess they want me to stay, because it's been peachy keen ever since.  A little saccharine, even.  There's still the passive-aggressive shit just under the surface, but I'm being careful and I think she knows not to push me too far.  I hate that this kind of stuff inevitably happens, because I really don't have a hidden agenda and I'm not trying to prove anything, so I don't know why these bookkeeper types feel so threatened by me.  It's not the first time this has happened.  I wonder if I'm just too nice, and therefore, they think they can bully me.  After 20 years of therapy, I think I'm finally learning to set boundaries, but it's still incredibly anxiety-provoking for me.  Maybe the worst is over and I'll settle in, do good work, and be happy there.

At times like this, I always remember the immortal words of Rodney King:  Can we all get along?

Take 17 seconds and watch this - It always brings me to tears... 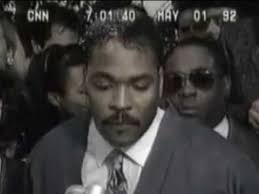